Baking is not my forte. I prefer making things like soup and stew, dishes that allow for a loose interpretation of measuring and benefit from dashing in this and that to change the flavor. I’ve never been drawn to the rigidness of baking, the math of it makes me nervous, and my results are never quite what I imagine. Lucky for me I married a man who enjoys math and baking and does a fine job with both.

For his x-mas present this year, Derek bought us two seats in a sourdough bread baking class at King Arthur Flour up in Vermont. I was happy to tag along, but imagined the experience would leave me feeling inadequate. My expectations lowered, I scooted into my high chair with the other students, a white apron tied over my layers of clothes (it was -4F that day) and listened as our instructor laid out the syllabus for the four hour class.

Four hours is not nearly enough time to prepare, rest, and bake a loaf of sourdough; time is just one element that makes bread so magical. In order to make sure we saw every step of the process, we started at the end, then worked our way back to the beginning. Step one was shaping a loaf by hand. Our instructors had already made up a big batch of dough in a machine, let it rest, roughly shaped it into rounds and let it rest again. It was our turn to shape them into their final forms and let them rest (again) in a coiled bowl lined in cotton fabric.

Once that task was completed, we set out to start from the beginning with a blob of sourdough starter and a scale. We watched as our teacher measured in the flour and water and then chopped at the dough with a scraper, incorporating all the ingredients until the mixture was a sloppy wet mess. Back at our stations, the dough felt unruly and sticky, how would this ever be delicious bread? Once satisfied with the mixing, we let the dough autolyse, allowing the flour to be hydrated by the water and reducing the amount of mixing and kneading we’d need to do later.

Twenty minutes later and we were back at the bowls of slop covered in a layer of cling wrap. The mixture had stiffened up a bit and was showing signs of bubbling. All good signs we were assured. But the dough was shaggy and rough looking, it needed to be kneaded. The task seemed improbable, how would we ever get that mess to look like dough?Back at the front of the class, we watched as our instructor sprinkled salt onto the dough and mixed it in, then the glob was turned out onto the work surface and chopped up with a pastry scraper to help incorporate all of the salt. It was drying up a bit, but was still ragged along the edges.

“Dough can smell your fear, so if you’re not feeling confident, then you gotta fake it till you make it.”

She grabbed the roughly shaped dough at the top edge and picked it up like you would a cat, under its armpits. Then WHACK. She slapped the back end down on the bench and flopped the front over it. She picked it up again and WHACK. She did it so fast we could barely see what was happening, but four whacks later and the dough was smooth and lovely, and her hands were barely coated with a layer of stickiness. She slowed the process down and we all watched and pantomimed along as she repeated the process, slowly at first and then back to her regular speed.

“You have to be confident when you do this, and fast. If you go too slow, the dough will stick to the bench and your hands. Dough can smell your fear, so if you’re not feeling confident, then you gotta fake it till you make it.”

We made our way back to our benches and mixed in the salt then proceeded to pick up our dough cats. It felt unnatural to scoop up the sticky mess and whack it down. I kept trying to scrape up the bits of dough that were being left behind. Our instructor came over and grabbed my dough and gave it a whack, “Don’t worry about the sticky bits.” I scooped it up and whacked it down, the scale and the metal bowl on my bench rattling along with it. I laughed at the noise and the violence of it and tried again. Four whacks in and my dough was starting to get smooth and strong. I looked around at my classmates who were experiencing varying degrees of success. I was neither the best nor the worst, and it made me giddy. The now very dough-like blob went back in the bowl for another rest.

After resting and rising for two hours, the dough we had shaped at the start of class was ready for a slash with the lame (razor on a stick) and a trip to the industrial ovens that were heating up on the far side of the classroom.

Derek and I gave our three loaves a quick slashing and then loaded them into the oven using a long wooden peel. Once inside, one of our instructors hit a button to give them a shot of steam and we watched as they started to transform into beautiful loaves.

The bread forms an almost immediate crust in an steam injected industrial oven. 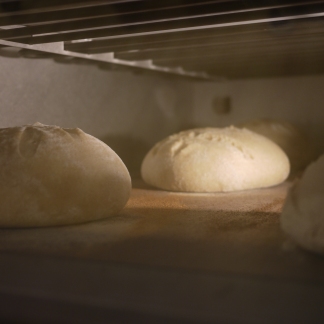 A few more minutes and the loaves begin to rise up nice and tall. 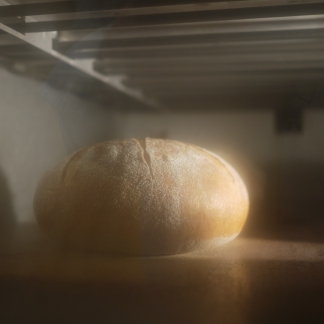 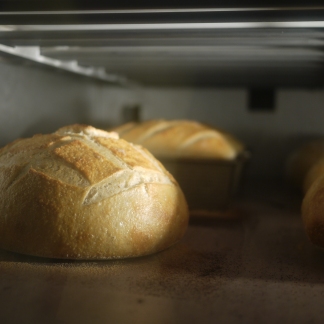 Patience is a virtue in many areas of life, but baking sourdough is where it really pays off. The dough needs time to rest and rise, and when it finally gets baked, it needs more time to brown. As Derek peered into the oven window he admitted he would have already removed his loaf, fearful of a burnt crust. As our instructor said, “No one is worried about a bit of char on a steak, but when it comes to bread people are terrified of a dark brown crust.” If you take your bread out before it’s well and truly baked, the moisture that’s left will make your crust soggy. Best to give its due time in the oven.

No one is worried about a bit of char on a steak, but when it comes to bread people are terrified of a dark brown crust.

They were magical loaves. Dark and crispy on the outside, light and airy on the inside. The semolina dotting the crust made them look like they were destined for a baker’s rack. Our classmates joked about selling them in the parking lot. We loaded them into bags while they were still warm, the magic of their transformation filled us both with a big injection of endorphins.

We left class with our resting blobs of dough and a small jar of sourdough starter to feed and care for. The next day, despite already having six beautiful loaves of freshly baked sourdough bread, we baked up four more in our humble kitchen oven. They slid off our pizza peel and onto our baking steel, and we poured boiling water into a cast iron pan seated just below to recreate the industrial oven’s shot of steam. They were beautiful and brown, and we felt like proper baking magicians.