I have a master’s degree in metalwork. Specifically, Jewelry and Light Metals, which is just another way of saying I don’t weld steel and iron. Metal things are something I am quite familiar with and fond of so it makes some sense that I would insist we rescue some old cast iron pans from the family lake house. They were a mess. Coated in a sticky oil, the surface uneven, the outsides caked in old grease. I’ve salvaged a few cast iron pans, but not really the correct way, because it always seemed like too much work. But John Hodgman inspired me.

A few weeks ago he posted a step by step tutorial on his Instagram stories for how to salvage and re-season a cast iron pan. This was also his way of promoting his latest book which is coming out in paperback. And now please indulge me for a moment while I pause this post to give a review of that book. Vacationland has a beautiful cover which made me more than happy to buy it, which is not what you’re supposed to do when choosing a book, but I am a sucker for good design so I indulge that part of my brain. I read the first few paragraphs and immediately laughed and then closed the book up because I wanted to savor it.

I bought this book because I love the cover & because I allowed @hodgman to bully me into buying it here on Twitter, & I’ve been reading it in fits & starts because I was afraid when it ended I’d be sad & now it is & I am. Thanks, John. I really loved it. pic.twitter.com/vFIjqy3xfk

This says more about me than it does about the book. I am all about delayed gratification. It’s why you will often find mostly finished chocolate bars, and the dregs of a particular candy in our cupboard, not to mention rotting leftovers, sometimes because I don’t like them, but other times because I really do like them and I want to savor them. It’s stupid and it’s something I am working on. Back to the book. I bought it in November and started reading it in December and I just finished it last week. In between I read many other books, but I saved Vacationland for when I needed a jolt of humor or just inspiration for my own writing. The greatest compliment I can give John Hodgman is that I hope I someday manage to write even one sentence as well as he does.

His storytelling ability is a wonder to me, he casually moves from one idea to the next, while interspersing a different idea within, and then returns to the original thought. The timing is impeccable. It is funny and self-deprecating without being obnoxious about it, and many of the struggles he is dealing with as a writer, as a human, as a white, privileged, middle-ish aged man are struggles I think about as a wanna-be writer, human, white, privileged, middle-ish aged woman. Did I mention it’s funny? Anyways, you should read it. I cried at the end because he captured the essence of something I have been thinking about a lot lately. Mostly that being uncomfortable with trying something new is painful, normal, and absolutely necessary.

Back to the pans! A few years ago we rescued the largest of the cast iron pans and I half-assedly re-seasoned it, but as Derek became more invested in bread making, he’d been using it to pour boiling water into as he slid the loaves into the oven as a way to give the bread a shot of steam, and then not coating it with oil afterwards. Which meant the patchwork of seasoning was failing. I looked up how to properly season it and was horrified to discover how long it would take–24-48 hours in a lye bath, 6 trips to a 450 degree oven with a very light coating of flax seed oil, for two hours each–and was like, nah, I’ll just skip the lye and just scrub it a bit and then swipe it with a bit of oil, cook it for 30 minutes and call it a day. It looked better, but it wasn’t great.

Last week, as we were cleaning out the lake house to sell it, I found 2 more pans, a medium sized and a teeny tiny one. I had just watched John Hodgman clean his own pans and thought, maybe this won’t be so bad. We brought them home, I coated them with a healthy sprat from a decades old can of Easy-off, popped them in some plastic bags and waited until the next day to see what I was dealing with. 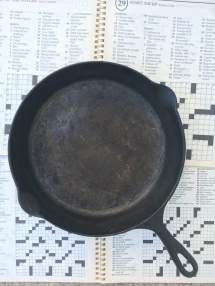 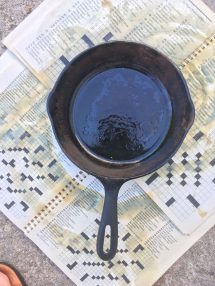 The littlest pan turned out the best, I got it down to almost bare metal. The medium needed another round, and the largest one was a straight up mess. I coated them with another spray of Easy-off, then the nozzle broke and I was forced to buy another stupid can even though the old one wasn’t empty. 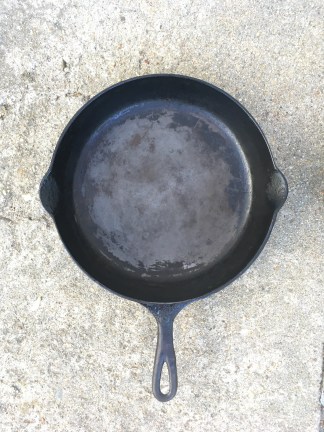 After another 24 hours, the largest one was in no better shape. I tried to chip off the caked on grease from the outside with little luck. Derek tackled it with the gusto he is known for and managed to scrape off a bit more. We put it back in the bag for 48 hours this time but it was still looking miserable. I was ready to give up. It wasn’t worth it. I tried sanding it down with my flex shaft and it was barely making a dent in the grease. I didn’t have the right sanding drum so that made it harder. I said it was a lost cause. Derek took it to the sink and sanded it, by hand, with little scraps of sand paper and got it into really decent shape. It’s pitted, and I’m not sure how well it will fare after several coatings of oil, but it looks way better and I’m impressed he gave it so much effort, and a little ashamed I gave up so easily.

But that’s what team work is really about isn’t it? When one of you can’t make it happen, the other steps up and takes on the task. I need to realize when he completes a task I’ve written off as futile, he’s not doing it to one up me, he’s doing it to help me. We’ve got a few more sessions in the hot oven to get these pans in fighting shape, but they’re looking mighty good. What an incredibly satisfying project.