Last week Derek and I went to the White Mountains for a few days. It felt weird to go on a vacation when what I do every day often feels like a break, but Derek was in serious need of a little time to clear his mind. We hung out at the pool, we sat on the porch, we played horseshoes and pinball. It was lovely. We also went on a hike. I have a complicated relationship with hiking. I enjoy being in the woods, looking at weird rocks, getting to the top of a summit, but everything in between is a struggle.

I blame it on asthma, but I don’t think that’s quite right. I do sometimes struggle to catch my breath on an incline, my tendency to hold my breath when I’m struggling is not helpful. My body and my brain don’t seem to work in tandem on a hike and I get frustrated easily. I do enjoy a rock scramble because you have to take your time, choose your line, and slowly make your way up, mountain goat style. But a regular, run of the mill hike sometimes breaks me. And that’s unfortunately what happened.

Derek picked a trail that would take us most of the way to Tuckerman Ravine, a bowl on the back side (that doesn’t make sense, mountains aren’t two sided) of Mt. Washington known for its epic stashes of snow and the thousands of skiers who trek up the mountain in the spring to ski the steepest terrain on the east coast. That’s right, in snowy conditions people plod their way up a mountain trail hauling skis, poles, and boots. I was dressed in lightweight hiking pants, trail running sneakers, a long sleeved UV protected shirt hauling a turkey sandwich and a small bottle of water. There was no reason for this hike to be challenging for me. And yet. 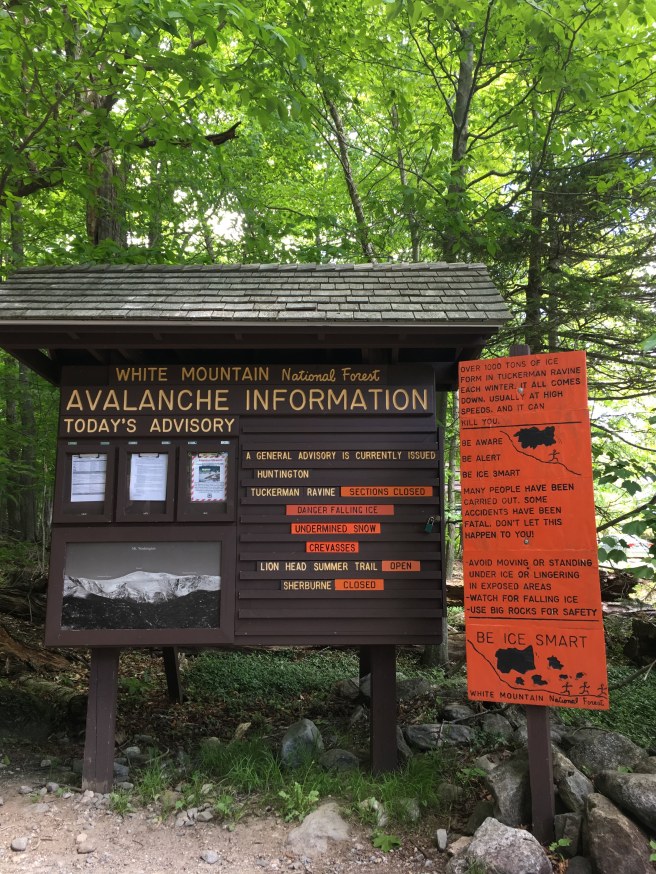 The trail was not especially steep, it was quite rocky, which often works in favor of my slow, methodical pace, but it was also straight up. I tried to mitigate the slope by zig zagging my way across the trail, effectively flattening it. Head down, eyes focused on finding a path, I barely looked up to check my progress. At one point Derek stopped and told me we were halfway there. He was wrong. The trail ahead looked just like the trail behind. Rocks. Up. I kept going, keeping my head down, focusing on breathing.

It wasn’t particularly hard, I was managing well physically, I’ve been running, my body is getting in better shape, but something happened. Whenever I snuck a peek ahead it looked the same, as if I’d made no progress, as if I were on a conveyor belt that inched me backwards every step I took forwards. I shook it off. I plodded ahead. I thought about the turkey sandwich and how good it would taste when we reached the top. A bridge came into view and the terrain flattened out a bit. Maybe we were close to the top? We weren’t. 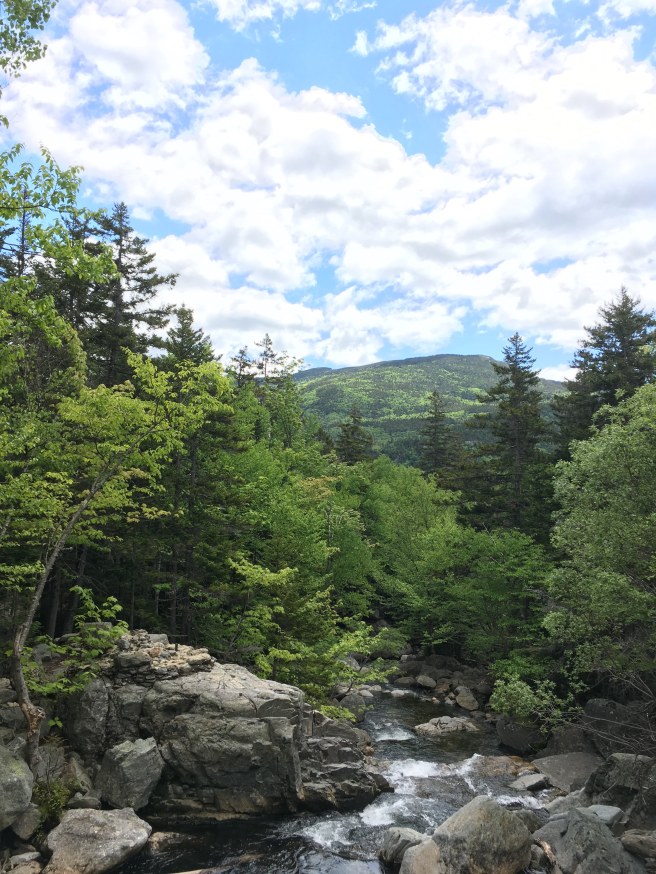 My mind started doing what it does best, sowing the seeds of doubt. Instead of focusing on what had been accomplished, it focused on how slow I was going, how embarrassing it was that we hadn’t reached the top. I was doing everything I could to maintain a steady pace and my brain was mocking me for how slowly I was going. I looked up again, the trail looked no different than it did an hour ago. Rocks. Up. The voice inside my head that relishes my failures reminded me that I wasn’t having fun, that the hike wasn’t hard, that I was bad at hiking, that my husband would be better off with the woman who sailed past us, barely breaking a sweat.

At some point Derek stopped, he asked if I wanted to eat a snack, and so I stopped and reluctantly looked ahead of me at the trail which looked the same as it always did. My attempts at easy-going, carefree breathing broke down and I began hyperventilating, my eyes filling with tears, my body going limp. If he was offering snacks then we still weren’t near the top. I wasn’t going to make it. Derek ushered me over to a large rock and I leaned against it while he handed me my water bottle. “I’m such a fucking loser. You have no idea how embarrassing this is for me.” His hand was gently resting on my leg, comforting me but maintaining a distance. He is wise and has seen some version of this melt down before. I was so ashamed. Ashamed I was struggling, ashamed I was now crying on the side of a trail, ashamed I couldn’t get my shit together. It was awful. Crying because you’re mad at yourself for crying is a sisyphean effort. The more you cry, the worse you feel, which makes you cry more, which makes you feel worse. I was in a bad way.

A group came up behind us and I buried my head in my hands, hoping they would think this was just a casual break, knowing the look on Derek’s face probably told them otherwise. I eventually became numb and realized if I didn’t reach our destination I would be even more furious and stood up and began hiking again. I told Derek to go ahead of me, the thought of him slowly following me was even more embarrassing than knowing he was keeping a slow and steady pace ahead of me. I tripped and fell on a rock, smacking both of my knees and taking my breath away for a moment. I got back up and waved Derek off. I was going to finish.

And then, I did. We made it to the caretakers hut, and the porch was empty and we unpacked our sandwiches and took in the view. I tried to apologize again for being so obnoxious on the trail, choking a little on tears and the cubed pickles sprinkled on my sandwich. He was understanding and thankful I told him what was going on because it’s not something he has ever experienced. Self-doubt weaponized.

We’ve been slowly trying to purge more clutter from our lives, picking through bins of childhood memories and trying to figure out why we need t-shirts from grade school or a threadbare toy that’s lost its eyes. In the process Derek found a puppet he doesn’t remember buying, in pristine condition. I asked what its name was and Derek said, “Melvin?” and it stuck. We take Melvin with us to places, document him marveling at nature and the world around him, a look of permanent joy and wonder sewn into place.

I love Melvin, Melvin is who I want to be. Unapologetically giddy and up for anything. Addressing my melt down and carefully explaining to Derek what it’s like when my brain actively conspires against me was difficult and good. I will remember the moment when I lost it, but I will also remember when I rallied and stared in awe at a ravine while eating lunch on a glorious sunny day. 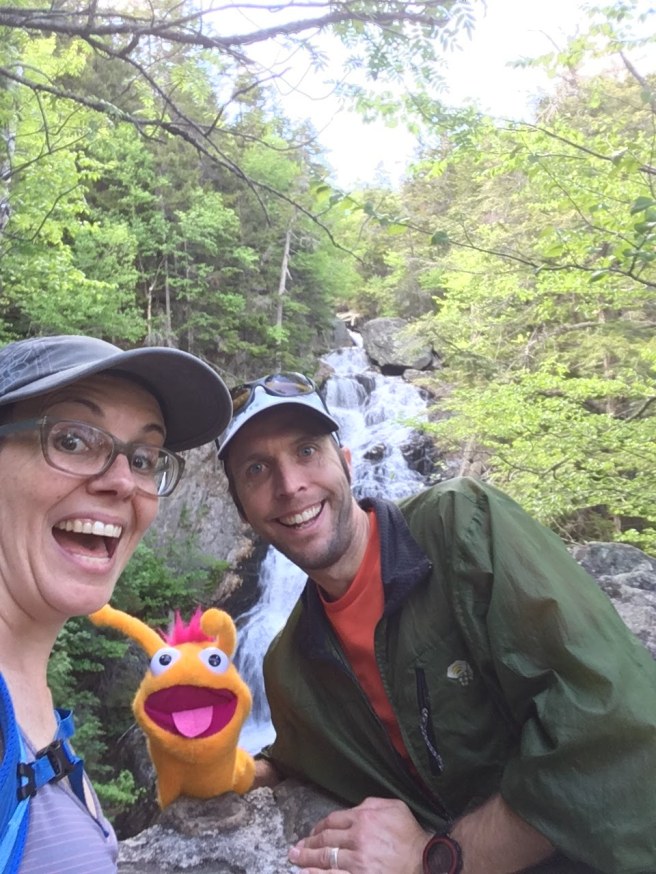 The hike down was less eventful, I remarked again on how relatively easy the hike was physically, but how mentally it didn’t do much to set me up for success. Because I wasn’t enjoying myself on the way up, Melvin stayed in Derek’s pack, but on the way down we let Melvin enjoy the view, his mouth open in awe at the waterfall transporting a winter’s worth of snow run off. And I smiled and laughed as we took selfies with Melvin, his infectious, permanent enthusiasm taking the edge off my embarrassment.

On a trip to an antique mall to look at stuff we had no intention of buying, I spotted a poster leaning against the wall. The design of it looked so current, clean lines, bold colors, simple layout, crisp typeface, from a design stand point, it could show up at a bus stop today and look of this time. But it was old and came from a time when (most of) the people in this country felt collectively ashamed of their President. Nixon resigned and Ford took over and the poster was an attempt to convince people it was ok to trust politicians again. Gerald Ford was making us proud again. I stared at the poster for a while and wondered what the campaign posters and promises of 2020, 2024 and beyond will look like as once again, (most of) the people in this country feel collectively ashamed of the man in charge of it.

And then I placed the photo of the poster into a photoshop document and made Melvin the star. I look up to a lot of people, and there are a lot of friends and acquaintances that encourage me to be my best self and I am grateful to them, but Melvin the puppet serves as a reminder that sometimes the best cheerleader can be the person/fluffy orange friend we give the most power to.